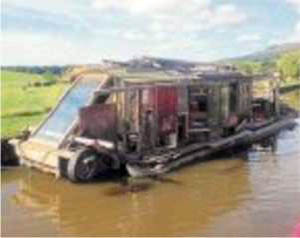 Derek Stansfield continues with his series of articles illustrating the diversity of the membership of the National Community Boats Association. This month’s article looks at how volunteers and other local elements can come together for the benefit of all.

There are discussions between the NCBA and The Canal and River Trust on how the two organisations can work together for the mutual benefit of both, particularly in the area of volunteer work.  Whilst this is ongoing, one of the NCBA projects has taken its own initiative and has worked closely on a project that is mutually benefit to both.

The approach to bridge No 182 on the Leeds Liverpool canal, a fixed bridge carrying the Skipton to Bradley road over the canal and is immediately north of the berth for the Skipton and Craven Action for Disability (SCAD) in Snaygill Marina.  An additional obstacle is the fact that it is on a bend, which also makes this bridge a little difficult for canal boats, particularly hired boats not used to the canal.  Recently an additional difficulty has grown up in the shape of overgrown trees and shrubs on the bank opposite to the towpath thus forcing the approach from the north side into the opposite bank and therefore not is the best position to negotiate the bridge and the bend.

The Chief Executive of SCAD, Roy Aldred, took the initiative and contacted the local officer of the CRT to check on whose responsibility it was for clearing, or cutting back, the vegetation on that side.  The landowner, a local farmer, was contacted to see if they had any objection to the vegetation being cut back.  Not only did he not object but he also provided a trailer for the wood and greenery to be taken away.

A work party was set up from the SCAD skippers and crews and several days were set aside and the tackled the overgrown stretch of canal.  Wood was placed in the trailer, which the farmer was pleased to take away to make a super bonfire for Guy Fawkes night.

This was therefore a prime example of how just a few local elements of the community can come together for the benefit of all.

Talking of SCAD, on the particular stretch of the Leeds/Liverpool canal they use there has become a regular sight that has caused amazement and amusement.  They have seen in the past horse drawn boats on the canal pulling canal boats, keeping up some canal traditions.  Now there is a man hauled floating vessel.  Not only is this man hauled, it is also built out of recycled materials that have been picked up and added to the vessel.  Buoyancy is provided with oil drums and canoe bodies on which the platform is built.

The sides consist of varying sections of panelled wood including some quite ornate pieces.  One side has a sort of bay window.  The interior looks to be well appointed, despite it being just a one roomed vessel, with a comfortable armchair amongst other furniture.  On the rear is a piano which, rumour has it, is being delivered from Liverpool to London.  Being towed along at the back is a bath, the purpose of which is not defined, although it could make the vessel en-suite!  Whilst being a source of amusement, one has to admire the ingenuity of the man who built this vessel and the commitment, drive and perseverance in undertaking the task.