Two Months in the Life of a NCBA Trustee – Towpath Talk, May 2016

Continuing our series illustrating the diversity of the National Community Boats Association.

With the exception of the Company Secretary all other roles within the NCBA are undertaken on a voluntary basis and can consist of a variety of roles and tasks.  Here Derek Stansfield, himself a volunteer and Director of Training, describes two months in the life of Paul Unwin, NCBA Chairman and Trustee.

Paul has a regular job as a trainer in the Fire Service and has to juggle these responsibilities with those of his post in the NCBA.  The NCBA website is undergoing a major restructuring and Paul has been involved with Bob Ratcliffe, Company Secretary, and Luke Slown, Website Consultant, in designing the new look website.  This will be up and running shortly and will enable members to update their own pages and profiles.  It will be a far more user friendly site as well.

As part of his role as a NCBA Moderator Paul has been in contact with some of our Projects and in particular Nottingham Narrowboat Trust about hosting one of the NCBA Trainer courses. 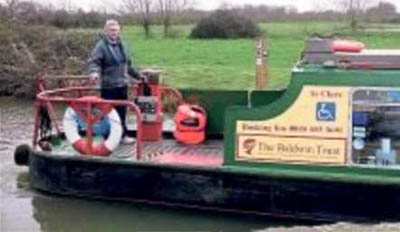 Finance is an ever present concern and whilst the NCBA is in a reasonably healthy position it is important that fundraising is kept at the forefront of our thoughts.  Therefore Paul is in constant touch with Loraine Grainger, Director responsible for Finance, in considering projects that could attract funding and these include:

Paul’s own Project, which is the Chesterfield Canal Trust, has a new trip boat, which is nearing completion.  All being well, the John Varley 2 will be taking its first paying customers at the IWA & Chesterfield Trailboat festival taking place on the 28th / 29th May 2016.  As you can see from the photograph it has now received a few coats of paint, and on closer inspection it would appear that the anodes did as well. 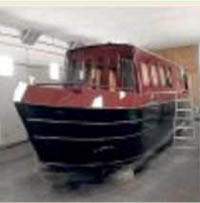 This year the Trust are involved in the Trailboat Festival.  It is the second time they have run  it in Chesterfield.  The last time was in 2005 which was a great success so all they need now is some good weather.

The photograph of the Festival at night was taken just below Ford Lane Lock close to the town centre.

Besides his duties as Chair and Trustee Paul also is a Senior Trainer and sits on the National Training Committee (NTC).  To keep his hand in he recently ran two CCBM courses for both the Baldwin Trust in Leicestershire and also for one member of Chesterfield Canal Trust.

The first course ran from the 4th to the 6th March which was an extremely windy and wet weekend.  Some areas of the river & canal were in flood which made things a little difficult for boat handling, however the photographs show the helm utilising a rear spring to move away from the mooring just above Cossington Lock.  The second course ran from the 1st April and this time the weather was a little better.

Incidentally The Baldwin Trust are looking for new volunteers for this season, and beyond, as it looks like they are going to be very busy.  Bookings are already up by 30%, so if you know any budding boaters in the Leicester area with time on their hands please point them their direction.  Training will be given to all new members eventually leading towards them obtaining a CCBM. 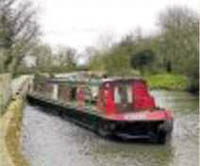 Paul will be the first to admit that his workload for the NCBA is no more onerous than that of other members of the Trustee Board, who themselves have specific roles as Directors of areas such as: Training; Finance; Networking; Publicity and more.  However the above will give an excellent illustration of the very important work that the volunteers in the NCBA do.