Community action out on the waterways of Leicestershire – Towpath Talk, July 2015

Over the past 12 months in these pages we have illustrated the diversity of the National Community Boats Association. In this edition we look at the Baldwin Trust.

NATIONAL Community Boat Association member The Baldwin Trust operates two narrowboats to provide outings for community and other groups on the River Soar and the Loughborough canal in Leicestershire. The boats have lifts so they are able to manage disabled and elderly passengers and others with special needs.

The name Baldwin Trust arose as a result of a small bequest from a patient who had been cared for in the Baldwin ward of a local hospital. The trust was set up in 1983 with three trustees. The monies given were to be used to provide facilities for the recreation of patients of the Baldwin ward with the object of improving their life conditions.

It was decided to obtain a narrowboat in order to provide waterway outings. Some time ago the trustees extended the use of the boat to residents of rest and care homes, they now provide a majority of the client groups who make bookings for full- or half-day outings on the water. The trust also offers trips to family and other groups and has hosted visits of children from Chernobyl as well as other overseas visitors.

It required four years of extensive fundraising from 1983 before sufficient money was available to commission a narrowboat. This was ordered from a youth training trust in Birkenhead, Merseyside and in 1987 narrowboat St Clare was ready for collection from Birkenhead.

The trust operated only this one boat for almost 15 years before obtaining a second vessel. During that time it had about 40 volunteers on its records. Most worked as crew but there were also teams to do boat maintenance, handle bookings and crew allocation, organise fund raising events and to administer the trust as a registered charity (515488).

No staff are employed but the trust meets the cost of fees and expenses for the volunteers. In addition to the trustees there is a management team responsible for boat operations.

Restored back to service

In 2002 Leicester City Council sought proposals for restoring two narrowboats to community use. Dandelion and Charlotte had been leased to a charity, Leicester Kids Afloat which had ceased operating in late 1990s. The boats had been moored close to Abbey Park and for a time they had been operated by the park wardens but the boats had then been left unused and were vandalised and trashed. 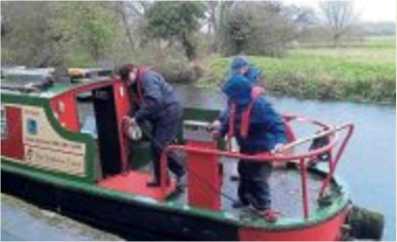 The Baldwin Trust was primarily interested in Dandelion because it was equipped with a lift to enable disabled passengers to be carried. A bid to repair and restore Dandelion was accepted by the city council but asked that the trust accept both boats and restore them. Both boats were transferred to the Baldwin Trust in late 2002.

After initial work to provide temporary windows and make both boats watertight, Dandelion was taken to Redhill Marina close to the junction with the Trent. It was there where volunteers started the substantial work to return Dandelion to a working state. This work was completed during 2003 and the boat returned to full operating service, initially at Bishop Meadow moorings and later Pillings Lock marina.

In order to work on Charlotte the trust accepted an offer to partner the Inside-Out Trust on a restorative justice project. The boat was moved to Foxton and then taken on a low-loader to a workshop in Gartree prison. Unfortunately the project did not complete a full working restoration. The boat was returned to the Baldwin Trust at Raynsway marina where the trust was able to get the boat working and sell it on to a group which moved it to the Kennet & Avon Canal for further work.

In 2010 the Baldwin Trust was pleased to be awarded the Queen’s Award for voluntary service because of its work with the local community. It attends the annual Leicester Riverside and Loughborough canal festivals in order to promote its work.

Presently the trust is looking to obtain a new boat to replace Dandelion. It will be a 10ft wide beam to provide additional space for wheelchair users. It is planned to use two local contractors, one to do the steel fabrication the other to do the fit out to the trust’s specification.

The trust is always pleased to welcome new volunteers and has also assisted other organisations with training to gain NCBA’s Certificate in Community Boat Management. 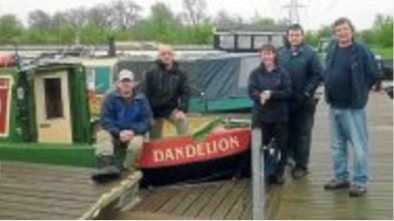 All its skippers hold a current CCBM (Certificate in Community Boat Management) the training for this is given to volunteers who have spent time working on the boats with a mentor prior to being placed on a course.

The trust can also offer a full variety of NCBA courses including the: