An Olympic legacy on the Ashton Canal – Towpath Talk, September 2015

Over the past 12 months in these pages we have illustrated the diversity of the National Community Boats Assiciation.  This month we look at the East Manchester Community Boat Project

EMCBP was founded in November 1994, at a time when Manchester’s bid to host the 2000 Olympic Games focused attention on East Manchester.   Representatives from British Waterways, Greater Manchester Police, the Inland Waterways Association and Ciba Specialty Chemicals attended “Partnership 2000” meetings to consider a community project that would increase peoples’ awareness of, and be linked to, the Ashton Canal.   They hoped that by encouraging people, particularly youngsters, to become part of a community project it would broaden their outlook, boost their self-worth and reduce crime and vandalism along the Ashton Canal.   Then they had it – the local community could build a community narrowboat!

The first problem was how to contact local residents to enlist their support.   Ciba put out a plea for volunteers in the July 1994 edition of their newsletter “Community Matters” and a handful of inquisitive residents and community groups responded, they all thought the idea to build a narrowboat was a good one, and, in November 1994, they created East Manchester Community Boat Project to do just that!

It quickly became clear that the necessary knowledge, facilities and skills were not available locally, however, visits to boat yards, advice from British Waterways and community boating organisations proved invaluable.   EMCBP became a registered charity, joined the Community Boats’ Association and the committee learned quickly, once they had a clear idea of their requirements they asked three boat builders to quote for the work.

In September 1995, Wincham Wharf Northwich was awarded the contract to build the 12-seater day-boat.   David Massey had agreed to accept stage payments, which helped enormously.  By agreeing to start the build with a small deposit, David gave the committee the opportunity to set manageable goals; watching the boat take shape redoubled their efforts to ensure funding for the next build stage.   In February 1996, “Community Spirit” was put on the water and crew training began.   As soon as all crewmembers had their RYA Helmsman Certificate the first passengers were welcomed on board. 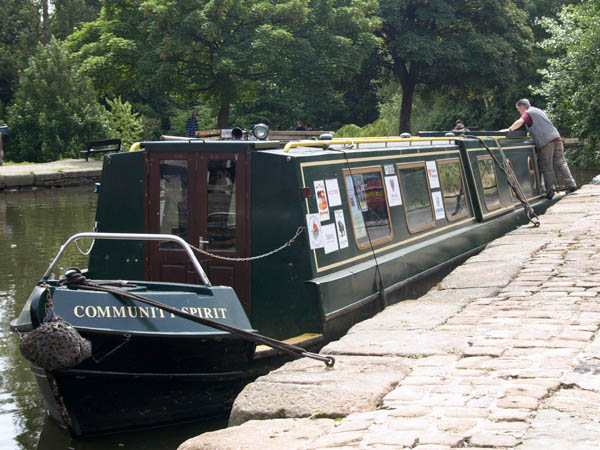 “Community Spirit” is 52ft long and 6ft 10½ins wide, weighs 13 tonnes, has a 35 horsepower Beta Marine diesel engine and is moored at Portland Basin, Ashton-under-Lyne.   She can accommodate 10 passengers and has an integral hydraulic hoist to assist boarding for two wheelchair users.   The bathroom has a toilet (adapted for disabled use) and baby-changing facilities and the galley has a fridge, microwave and three-ring gas cooker.

EMCBP became a Charitable Incorporated Organisation on 28th February 2014.   It continues to be run by a small but enthusiastic and dedicated team of volunteers and its aims remain unchanged, to provide, free of charge, an educational, recreational, historical and environmental facility for children and adults who may be disabled or disadvantaged.   It costs in the region of £7,500 per year to run the project and its aims can only be met by the commitment of its volunteers, relentless fund raising efforts and the support of benefactors, seat sponsors, passenger groups and members of the public who make donations.

EMCBP is a member of the National Community Boats Association and is proud to be an NCBA Accredited Training Centre, offering a variety of NCBNA courses including Boat Handling, Competent Crew and Certificate in Community Boat Management – a requirement for all skippers.   New volunteers are always welcome and all volunteers are encouraged to attend training sessions held every Monday.

During the 19 years that “Community Sprit” has been in service, technology has moved on.   Currently, trustees are fund-raising for a state-of-the-art environmentally friendly narrowboat with improved access for six wheelchair-dependent people, better viewing facilities and “remote” steering technology that wheelchair users can operate (with supervision).   Solar powered panels will charge the batteries to power not only the boat but the on-board equipment too.   The new boat will have a larger forward deck with drop-down ramps on both sides for easier wheelchair access, wider cabin doors for easier access to the inside of the boat, much larger windows for better visibility and a modified galley to give more cabin space.   It will also have “flexible” seating to allow easier movement around the cabin, particularly for wheelchair users.