Derek Stansfield continues with his series of articles illustrating the diversity of the membership of the National Community Boats Association.  In this edition he describes an organization that has boats of more than 12 passengers and thus is mandatory for them to use the Boatmaster qualification but still finds value in membership of the NCBA.  It is also one, as you will see, is very diverse in itself.

Originally opened in 1810, the Kennet & Avon Canal (like the rest of the canal system) gradually fell into disrepair. Enter the Kennet & Avon Canal Trust (KACT). Formed in the 1950s, the early years were primarily concerned with preventing the closure of the canal and digging out locks and rebuilding major structures. Eventually the whole waterway was rehabilitated and transferred to British Waterways (predecessor to the current Canal & River Trust). With the award of Cruiseway status and CRT installed as operators of the canal, KACT had achieved its original primary objective. They were therefore delighted in 2014 when over 50 years of volunteer effort was rewarded by receipt of the Queen’s Award for Voluntary Service.

However, there is no sense of resting on their laurels. Their motto now is to Protect, Enhance and Promote the canal so that future generations can continue to enjoy and benefit from this unique waterway. As they move through the 21st century, their ambitions and aspirations continue to grow, particularly in the following areas: 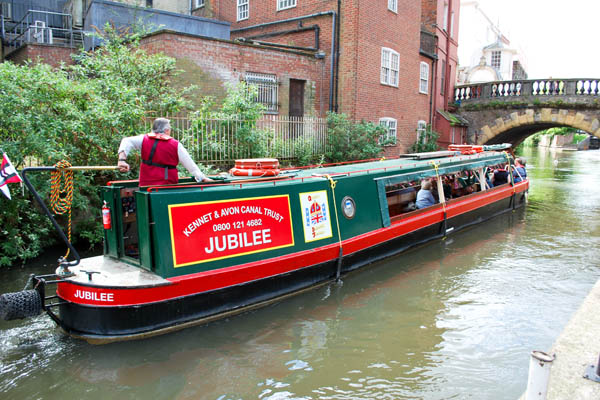 Trip boats – the KACT runs 4 trip boats which are based at major centres along the canal: Bradford on Avon; Devizes; Hungerford; and Newbury. All boating activities are undertaken by volunteers, but they are a highly trained and dedicated bunch. Their boats are regulated by the Maritime & Coastguard Agency, and they take pride in our ability to satisfy all appropriate legislation covering the provision of public trips on the waterways. There is a standard set of policies which ensure safe, reliable and approved operations. Crewing is supplied by volunteers linked to each of the boat mooring centres, so each boat has a very personal and unique camaraderie amongst its volunteers and offers trips which are directly linked to the needs of the local market. Public trips, charter trips, educational trips – you name it and they can deliver it. Substantial training is provided for all aspects of boat operation, which leads to the internal qualification of Helmsman and the external qualification of Boatmaster (both terms gender neutral) for those who wish to progress this far. However, amongst this training and the trips they offer there is a substantial social programme within each of the centres where volunteers can relax and enjoy activities together.

Crofton Pumping Station – located at the border of Wiltshire and Berkshire, Crofton was an essential component of the original canal. Crofton has two steam powered beam engines, one of which is the oldest steam engine in the world doing the job for which it was designed in its original location. Crofton is now a world-famous engineering archeology site and an enthusiastic team of volunteers care for and maintain the operating equipment. There are regular steaming days throughout the season which attract a huge range of steam enthusiasts and large crowds. Crofton volunteers provide guided tours of the facility and proudly display the results of their endeavours – steam engines from the cutting edge of the industrial revolution which still operate today.

Museum and Archive – at their headquarters in Devizes, the KACT has a museum which illustrates the history and operation of the canal and maintains the official archive of the canal throughout its history.

Holidays for the disabled – in January 2016 the Trust entered into an alliance with the Bruce Trust, who for 26 years have operated a fleet of specially designed wide beam boats which allow people with disabilities to enjoy canal holidays.  These boats are now managed by the KACT and based at Bedwyn wharf. There are currently about 90 volunteers who service and turn-round the boats, but more are always needed.

Youth/development activities – as if this isn’t enough, KACT has also recently taken ownership of the Lady Hilda, a community boat previously owned by Hampshire County Council. They will honour the bookings which Hampshire has already made for this year and have committed to trying to find new groups who may find a use for it. Already Wiltshire Wildlife Trust, Wiltshire Council and CRT are expressing interest in using the boat as part of their various school/social/educational programmes.

Since its inception, the role of the KACT has changed enormously and their activities and abilities continue to grow.  There is a membership of some 1,900 and about 500 active volunteers. However, more are always needed. !f you are interested in crewing a boat, preparing boats for use by holidaymakers with special needs, supporting youth programmes, maintaining and operating steam engines or, just as importantly, want to help in any other way to ensure that future generations benefit from the Kennet & Avon Canal, please contact them.

You can call the Devizes head office on 01380 721279 Monday-Friday from 9am – 5pm or send an e-mail to office.manager@katrust.org.uk. They would love to hear from you.