Females to the Fore in Nottingham – Towpath Talk, March 2017 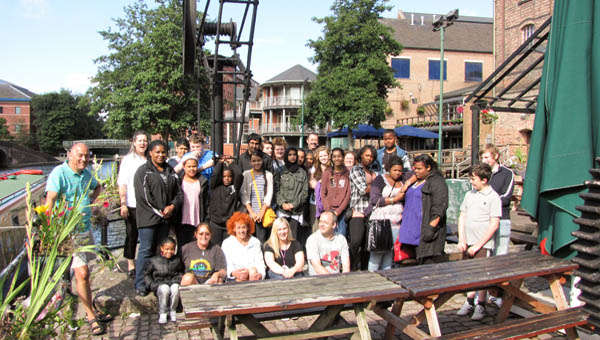 Derek Stansfield continues his series of articles about the diversity of the membership of the NCBA.  In this issues he travels to the East Midlands and the city of Nottingham.

During a recent NCBA Trainers course, which was based at the Nottingham Narrowboat Project, we just coming to the end of the first day when all of a sudden, a cacophony of noise erupted as a birthday celebration got underway on the floor above, that promptly ended the day’s session.  This was a far cry from earlier in the day when along with the trainees we had a quiet and peaceful few hours on the canal. 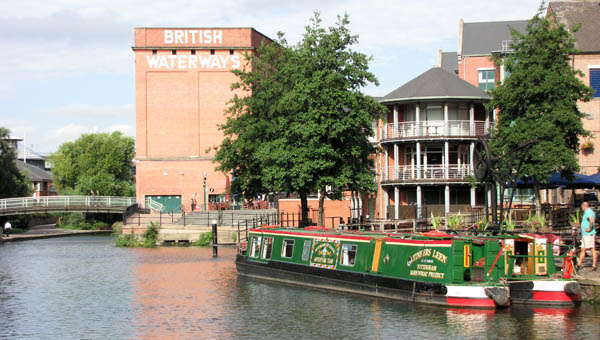 Based on Canal Street between the Fellows pub and the Via Fossa pub, the office and resource room of the Nottingham Narrowboat Project are upstairs on the 2nd floor at the Canal House pub and the boats are kept just behind it.   Nottingham Narrowboat Project was set up by Nottingham City Council in 1975 as a forward-thinking plan to give children access to the waterways.  Over the years, it has given many in the East Midlands their first experience of life on the waterways and the audience has spread to the aged and infirm as well as schoolchildren and teenage groups.  The Project currently has two boats, Tinkers Leen, named after the small local river that runs into the canal.  This is a purpose-built boat and was acquired by the Council in 1980’s.  It is 70 foot long and has wheelchair access, including a toilet and shower making it ideal for both abled groups as well as those with disabilities.  Tinkers Leen can sleep ten people in bunks with a skipper and mate accommodated in the rear cabin.  The second boat, Megan, is also 70 foot long and equipped similar to Tinkers Leen but without the lift.

The Narrowboat Project is also an Approved Activity Provider (AAP) for the Duke of Edinburgh’s Award scheme for Gold residentials.  Work on board as a crew member will give participants the opportunity to gain “Community Crew Course” and “Boat Handling Skills” certificates endorsed by the National Community Boating Association (NCBA). Skills learnt will include boat handling, lock working, waterways safety and a general taster of waterways life all set in an informal and relaxed environment.

Keeping the whole show on the road needs an army of helpers and the Project can count on around twenty local volunteers skipper and crew to take out the parties and groups.  Not only do the skippers handle the boat but they also cater for the special needs of the passengers.  Although clearly hard work it is also rewarding as many of the volunteers will testify, especially as many have been with the project since it started in 1975.

Bringing her own passion for narrow boats to a wider audience Debra Porter runs and heads the project.  Debra is the flame haired life and soul of this Nottingham City Council initiative.  Although she might have the job title of Project Worker she is ably assisted by her sidekick, Catriona Joynt who has recently obtained her Trainers certificate and is now taking a more involved role with the project.  That now makes two very passionate ladies, well at least about boating and the project in particular.  All this helps to provide an invaluable and exciting experience to the community in the East Midlands